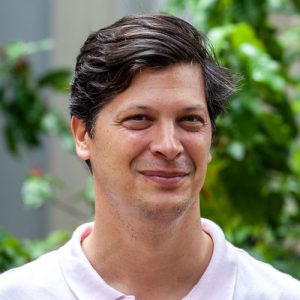 Alexander Mawyer is an associate professor for Pacific Islands Studies, editor of The Contemporary Pacific: A Journal of Island Affairs, and codirector of the University of Hawai‘i’s Biocultural Initiative of the Pacific. He has served as the director for the Center for Pacific Islands Studies since August 2021. He has conducted fieldwork with the Mangarevan community in the Gambier and Society Islands of French Polynesia and with Chuukese and Mortlock communities in the Federated States of Micronesia. His work has focused on language at the intersection of culture, nature, and history. He served as one of the coeditors of Varua Tupu: New Writing from French Polynesia, the first anthology of Ma‘ohi literature to appear in English and 2007 winner of the Hawai‘i Book Publishers Award for Excellence in Literature. His publications cover a diverse range of topics including coediting a special issue of Ethos: Journal for the Society for Psychological Anthropology devoted to culture and spatial cognition in Oceania. More recently, he has published on the semantics of natural kinds and landscape terms in Eastern Polynesian languages including forests, insular fresh waters, Tahitian practices of marine resource governance, and issues of conservation and sovereignty. Recently he was invited to serve as an adviser to the US National Oceanic and Atmospheric Administration (NOAA) West Hawai‘i Integrated Ecosystem Assessment (IEA).