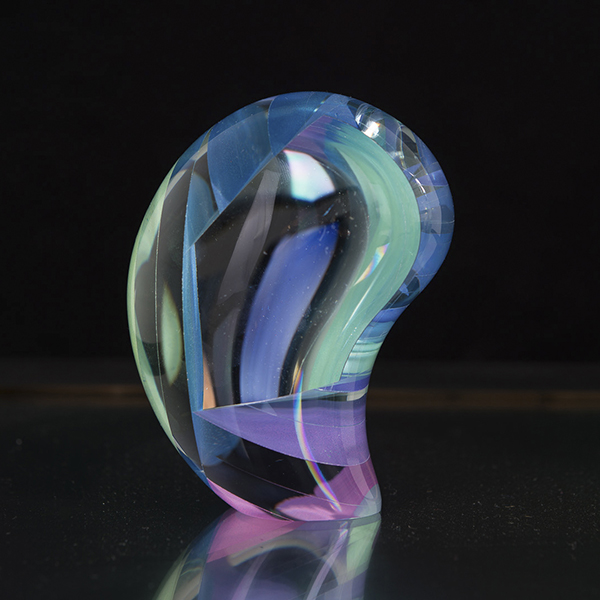 David Harada’s sculptures are highlighted as part of an expanded arts partnership of the University of Hawai‘i at Mānoa (UHM), the Halekulani and its sister hotel, the Waikiki Parc.

Born and raised in Mililani, Hawai‘i, David Harada received a Bachelor of Fine Arts degree with an emphasis in glass from the Department of Art + Art History, UHM, in 2016. Glass inspires him because of its transparency, refractivity, and quality to be perceived as a liquid or a solid. His current work includes sculptures made of laminated glass that are ground and highly polished.

Harada states, “Memories are stratified by thoughts and emotions. They may appear permanent but like gemstones they erode and chip away over time. Each newly exposed facet reveals a layer of hidden history, providing new perspectives on the whole.”

Guitarist Christopher Hopper will provide music at the opening reception in this series of up-and-coming young artists’ exhibitions at the Waikiki Parc. Hopper currently is working toward a Bachelor of Music degree in performance at the Department of Music, UHM. He has studied with guitar virtuosos Carlos Barbosa Lima, Benjamin Verdery, John Dearman, Andrew York, and the Brazilian Guitar Duo’s Douglas Lora and João Luiz.

Harada’s future plans include gaining experience as the studio manager of the UHM glass studio over the next year followed by a return to Pilchuck Glass School as a student or as a staff member. Plans to attend graduate school are also on his horizon.