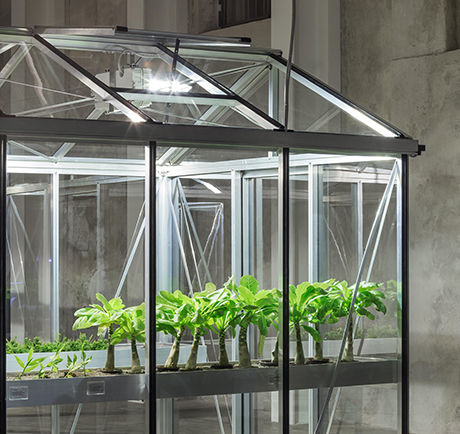 Today’s art world is understood as a system no different from other systems—be they ecological, economic, or political. But there’s more: no clear boundary separates the networks of these systems. If anything, there are points of intersection. Michael Wang explores the aesthetics of an art that actively engages with these systems, and the perspective of artists as they consider the objectives, limits and structure of a work that is no longer a matter of objects, but nimbly moves through the folds of these systems as energy.

Michael Wang (Born 1981 Olney, MD. Lives/works New York, NY) uses systems that operate on a global scale as media for art: species distribution, climate change, resource allocation and the global economy. His works include “Extinct in the Wild” a series that examines the unique status of species that persist exclusively under human care, “Carbon Copies,” an exhibition linking the production of artworks to the release of greenhouse gases, "Rivals," a series that connects the sale of artworks to corporate finance, “Terroir," monochrome paintings made from the ground bedrock of world cities, and "World Trade," an exhibition tracing the material aftermath of theWorld Trade Center after the attacks of 9/11. He has exhibited in Europe, Asia, and the Americas, most recently at the Fondazione Prada in Milan, Foxy Production in New York City, and Parque Cultural in Valparaíso (all 2017). His theoretical writings have appeared in Log, Mousse, Texte zur Kunst, Artforum, and Cabinet, among others.

In Hawai‘i, he will continue his “Extinct in the Wild” project which has been shown at the Fondazione Prada in Milan, and at the XX Bienal de Arquitectura y Urbanismo in Valparaíso Chile. Adopting the scientific designation “Extinct in the Wild,” Wang’s work focuses on flora and fauna species that are no longer found in nature but that persist through human intervention and care. These species represent a “kind of passage from nature into culture,” and with Wang’s intervention a further transition into the realm of fine art. Michael hopes to document the last location where these species were observed in the wild as well as their preservation in captivity or cultivation. In Hawai‘i, he is particularly interested in learning more about the ʻAlalā (Corvus hawaiiensis) on Hawai‘i island; the Ālula (Brighamia insignis) on Kaua‘i; Mt. Kaʻala Cyanea (Cyanea superba) and Sharktail Cyanea (Cyanea pinnatifida) on O‘ahu; and the Kokiʻo (Kokia cookei) on Molokaʻi.

TRADES A.i.R. program seeks to address the underrepresentation of contemporary art in the Hawaiian Islands by providing maximum community access and fostering arts appreciation locally. At the core of our mission is a Visiting Artist in Residence Program. TRADES aims to fund travel, lodging and studio space for selected national and international visiting artists. Committed to outreach, we are partnered with the Honolulu Museum of Art and the Department of Art and Art History at the University of Hawai‘i Mānoa. TRADES creates a round-trip circuit for contemporary art in the islands, with the introduction of offshore techniques and the exportation of local perspectives. TRADES was founded by Don Felix Cervantes and Aaron Wong in January 2016. A sponsored project of Fractured Atlas, our intended reach is to all Hawaiian Islands and to visiting artists worldwide.