Events + Programs (events are free and open to the public)

An exhibition of original photographs by Francis Haar documents the changes to ‘A‘ala, the neighborhood that is now Honolulu’s Chinatown, during the 1960s. The exhibition is curated by Gaye Chan.

Francis Haar (1908–1997) was a Hungarian expatriate photographer who lived in Honolulu from 1960 until his death. Primarily recognized for his photographs of Japanese and Hawaiian cultural practitioners, he photographed (on his own initiative) the changes to ʻAʻala during the 1960s. His hundreds of medium-format images capture the vibrant street life of ʻAʻala as well as the destruction brought to the area by urban development. On display at the John Young Museum are forty of Haar’s original black and white silver gelatin prints, his contact sheets in relation to these prints, his movie and still cameras, and photographic ephemera. Also on view is the important and little-known 1968 film Aala – Life and Death of a Community, a 25-minute documentary by Haar, in collaboration with Stephen Bartlett and Kenneth Bushnell. Displayed will be a map developed by Chan with the help of Natalie Besl, Don Hibbard, and Lorraine Minatoishi—“Francis Haar: Then and Now”—showing eighteen sites photographed by Haar along with their present locations. The project allows for a rare glimpse into the street life and architecture of historic Honolulu, and a new look at one of Hawaii’s master photographers. It also speaks to contemporary concerns about gentrification, land-use, and urban diversity. The exhibition is accompanied by a free brochure with an introduction by Gaye Chan, and history-driven short essays by Ian Lind, Lorraine Minatoishi, and Maika Pollack.

Locations of 18 photographs included in this exhibition have been identified. See Haar’s works (1963-1967) paired with images from Google Map, screen-captured in 2019. 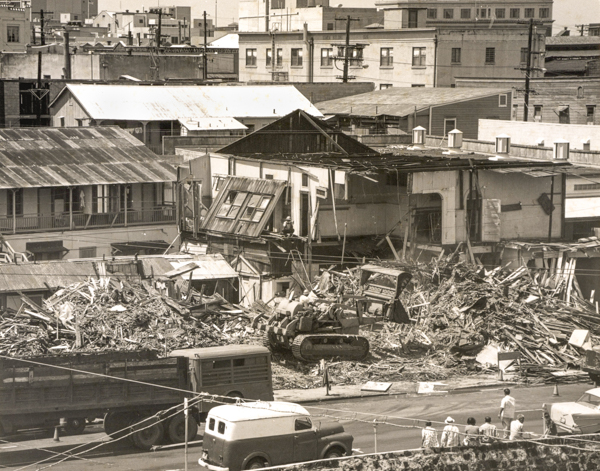 Francis Haar (1908–1997) is among Hawaii’s best-known modernist photographers. He relocated to Hawai‘i with his family in 1960, and produced numerous films and thousands of images on Hawaiian culture and the artistic community in Hawai‘i. His work is in the collections of the Victoria and Albert Museum (London), Museum of Modern Art (New York), Hungary Museum of Photography (Kecskemét), and the Hawai‘i State Foundation on Culture and the Arts. Haar also taught photography at the University of Hawai‘i at Mānoa between 1965 and 1985.

Sponsors
The exhibition is generously sponsored by the University of Hawai‘i at Mānoa’s Department of Art + Art History and College of Arts + Humanities; the John Young Foundation, the Cooke Foundation; the Hawai‘i State Foundation on Culture and the Arts through appropriations from the Legislature of the State of Hawai‘i and by the National Endowment for the Arts; Halekulani Hotel – Hospitality Sponsor for the Arts at UH Mānoa; Treehouse; Student Activity and Program Fee Board; and anonymous donors. All photographs for the exhibition are drawn from UH Mānoa’s Hamilton Library Collections.

For more information please contact Sharon Tasaka at 808.956.8364 and gallery@hawaii.edu