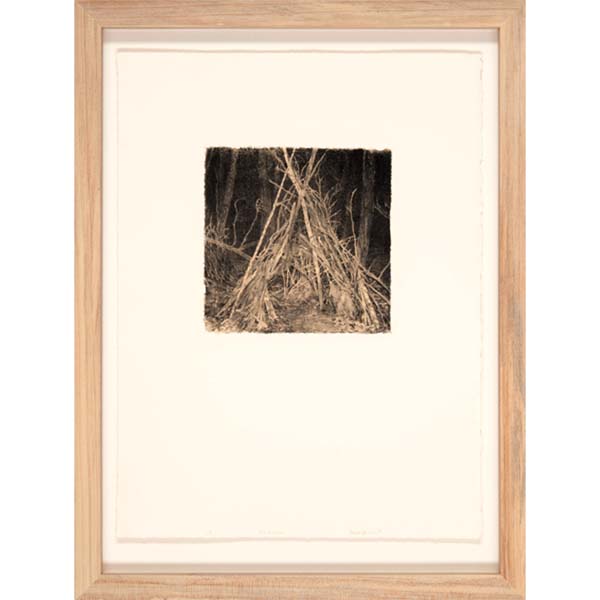 Taylor Johnson‘s installation and prints are highlighted as part of an expanded arts partnership of the University of Hawai‘i at Mānoa (UHM), the Halekulani and its sister hotel, the Waikiki Parc.

Taylor Johnson is a Hawai‘i-based artist who works primarily in printmaking, specifically lithography. Johnson’s background in painting and her habitual collecting of vintage and organic ephemera also influence her work. Many of these works are responses to landscapes she experienced while growing up in Maui, as well as those of the northern U.S., where she would spend her childhood summers. Borrowing from old photographs, birds, and different types of vistas and dwellings she observed as a youth, she creates images that invoke the sense of being both tenderly familiar and eerie.

Johnson, currently a BFA candidate at the University of Hawai‘i at Mānoa (UHM), will graduate in fall 2017. She received her Associate in Arts degree from the University of Hawai‘i Maui College in 2014. Johnson has participated in both local and national juried shows, and most recently created a body of work for SYSTEMS: 2017 Bachelor of Fine Arts Exhibition at The Art Gallery, UHM.

Guitarist Christopher Hopper will provide music at the opening reception in this series of up-and-coming young artists’ exhibitions at the Waikiki Parc. Hopper studied guitar with Nā Hōkū Hanohano Awards finalist Ian O’Sullivan and ukulele under Dr. Byron Yasui. In 2016, he received a Bachelor of Music degree in performance from the Department of Music, UHM. He has also studied with guitar virtuosos Carlos Barbosa Lima, and the Brazilian Guitar Duo’s Douglas Lora and João Luiz, Benjamin Verdery from Yale University, and Grammy Award-winning guitarist John Dearman from the Los Angeles Guitar Quartet (LAGQ).