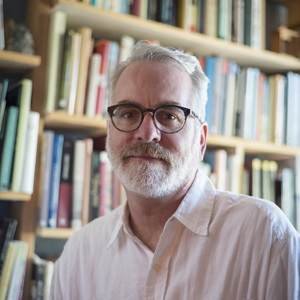 BIO
John Szostak’s primary research focus is on modern Japanese art history, especially Nihonga, or neotraditional painting. He did his PhD research as a Fulbright fellow at Kyoto University, where he studied Kyoto-based Nihonga painters and their professional networks in the early 20th century. His academic work has been funded by the Japan Studies Endowment (UH-Manoa), the University Research Council (UH-Manoa), and the Metropolitan Center for Far Eastern Art Studies; in 2010 he was selected as a Robert and Lisa Sainsbury Fellow, funding one-year of post-doctoral research at the University of London (SOAS). Generally speaking, Szostak’s research investigates the intersection of artistic identity, national heritage, and received cultural tradition in modern Japan, with special attention paid to both the technical and ideological aspects of neotraditional Japanese painting. In 2013 he published a book on Kyoto painter Tsuchida Bakusen (1887-1936), and he has contributed essays to several edited volumes, international exhibition catalogues, and academic journals. His ongoing research includes a translation project entitled “Japanese Modern Art Sources and Documents (1860s-1940s),” and a study of modernist Japanese Buddhist painting. He is also curating an exhibition on the theme of historicism and tradition in contemporary Japanese art, scheduled to open in the UH Manoa University Art Gallery in fall 2016.