Established in 1936 under the leadership of Charles A. Moore and Wing-tsit Chan, the Department of Philosophy at the University of Hawai‘i at Mānoa dedicated itself to an ambitious but historically necessary project: the bringing together of Western and Eastern philosophers in a community of critical discourse. In the early stages, emphasis was placed on introducing Western philosophers to the major ideas and distinctive ways of thinking offered by Asian cultures. 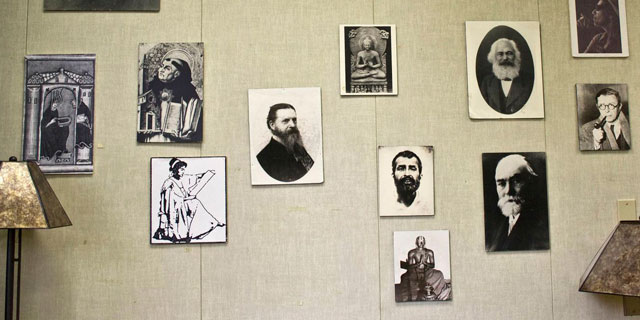 Broad survey courses in Indian and Chinese philosophy were offered; conferences involving leading philosophers of both Asian and Western countries were held; the journal Philosophy East and West was founded. During the late fifties and sixties, the Department grew rapidly. Eliot Deutsch succeeded Charles A. Moore upon his retirement in 1967 as editor of Philosophy East and West and as professor of comparative philosophy. Specialists in the Asian philosophical traditions such as S. K. Saksena (succeeded by K. N. Upadhyaya) in Indian philosophy, Kenneth Inada (succeeded by David J. Kalupahana) in Buddhist philosophy, Thomas P. Kasulis (succeeded by Steve Odin and Graham Parkes in Japanese Philosophy), Chung-ying Cheng, Chung-yuan Chang (succeeded by Roger T. Ames) in Chinese philosophy have been responsible for building up the undergraduate and graduate curriculum in Asian philosophy.

During this time, the Western program as well acquired considerable strength, with Irving Copi joining the Department in 1969, the extension into Islamic philosophy with the appointment of Lenn Goodman, also in 1969, the appointments of Ken Kipnis in 1979, and the arrival in the late ‘80s of Larry Laudan, Jim and Mary Tiles, and Ron Bontekoe. Lenn Goodman’s replacement upon his retirement in 1995 by Tamara Albertini retains the Department’s expertise in Islamic philosophy while extending coverage of the history of Western philosophy to include the Renaissance. In 1996, two years after the retirement of K. N. Upadhyaya, the Department restored its strength in the field of Indian philosophy with the arrival of Arindam Chakrabarti, and extended its ability to cover issues in feminist philosophy as well as epistemology with the hire of Vrinda Dalmiya. Roy Perrett arrived in 2002 as a replacement for David Kalupahana, who retired in 2000. Graham Parkes resigned in 2008 and is now teaching at University College Cork, in Ireland. He was replaced, as of Fall 2009, by Masato Ishida, who has expertise in both Japanese Philosophy and the work of Charles Peirce. On Roy Perrett’s departure in 2010, the Department brought in Rajam Raghunathan, who has expertise in both South Asian Buddhism and ancient Greek philosophy. In 2011, Joseph Tanke joined the Department in order to strengthen its coverage of aesthetics and Continental philosophy. George Tsai joined the Department in 2012 to represent social and political philosophy.

Unique among departments of philosophy in American universities, ours possesses the resources to support doctoral work in Indian, Buddhist, Chinese, and Japanese as well as Western philosophy.  During the 1960s, emphasis was placed on the development of language skills. Students were expected to attain a high level of competence in one or two languages (European or Asian) relevant to their area of research. At the present time the faculty is conversant in Greek, Latin, Arabic, German, French, Sanskrit, Pali, Chinese, and Japanese. Graduate students from countries such as Thailand, China, India, Pakistan, Korea, Singapore, the Philippines, and Sri Lanka have considerably enriched the diverse cultural and linguistic life of the Department.

The Department is research-oriented and at the same time it is dedicated to the teaching of philosophy at many levels. Since 1987, Dr. Thomas Jackson has been the Department’s specialist in philosophy in education, serving as Director of the Philosophy in the Schools program (now the University of Hawaiʻi at Mānoa Uehiro Academy for Philosophy and Ethics in Education). The department also sponsors an undergraduate major program; M.A. and Ph.D. graduate-level work; and summer institutes, funded by the NEH, to train college and university professors in comparative philosophy.

Approximately sixty visiting and exchange professors have contributed significantly to the life of the Department; the conference program continues to expand into new areas; the Department hosts meetings of national and international societies, and sponsors both visiting and local speakers at departmental colloquia.

Being at once highly productive and extraordinarily diverse, the members of the Department of Philosophy at the University of Hawai‘i at Mānoa share in their commitment to the highest standards of intellectual integrity and together celebrate their rich tradition.