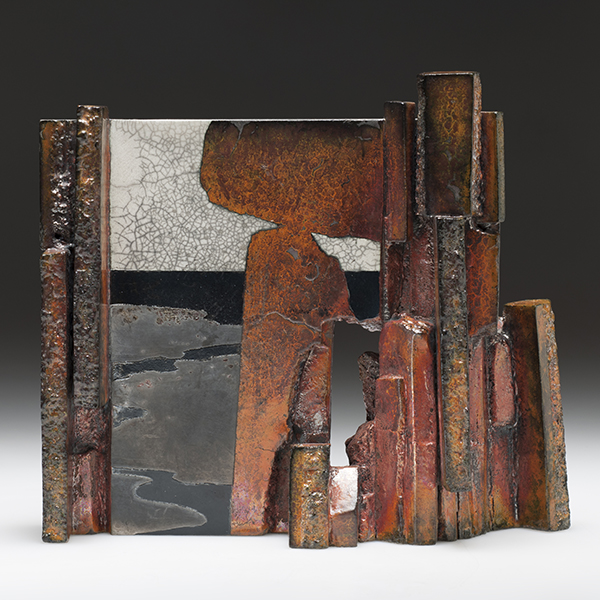 On view as a part of Earth, Sky, Time, Light, Space: The Ceramic Art of Wayne Higby

Wayne Higby is a ceramic artist and educator. His unique vision of the American landscape and its manifestation in work ranging from vessel form to tile, sculpture and architectural installation has brought him international recognition. His work is held in the permanent collections of numerous art museums around the world, including the Metropolitan Museum of Art, New York, the Victoria and Albert Museum, London, and the Museum of Modern Art, Tokyo.

He is a professor and the Robert C. Turner Chair of Ceramic Art at Alfred University, where he also serves as the Director and Chief Curator of the Alfred Ceramic Art Museum. Higby is a published authority on ceramic art, acknowledged for his articulate lectures, essays and critical evaluations. Higby is the recipient of both the Master of the Media and the Distinguished Educator Awards from the James Renwick Alliance, Smithsonian Institution as well as the Museum of Arts and Design, New York, Visionary Award.

Since 1991, he has traveled and taught extensively in the People’s Republic of China. Higby is an Honorary Professor of Art at Shanghai University and the Jingdezhen Ceramic Institute as well as the Founding Director of the ALFRED-CAFA program in ceramic design at the Central Academy of Fine Arts, Beijing. In 2004 he became the first foreign national to be acclaimed an Honorary Citizen of the “porcelain city“ of Jingdezhen.

Higby is a member of honor of the United States National Council on Education for the Ceramic Arts (NCECA), a Life Trustee of the Haystack Mountain School of Crafts, and the Vice President Emeritus of the International Academy of Ceramics, Geneva, Switzerland. A retrospective Infinite Place: The Ceramic Art of Wayne Higby opened April 27, 2013 at the Arizona State University Art Museum, Tempe. The exhibition travels for two years to numerous venues including the Smithsonian American Art Museum, Washington D.C. It is accompanied by a book of the same title published by Arnoldsche, Stuttgart, Germany. An additional book on Wayne Higby’s work and his project EarthCloud—the largest hand cut porcelain, architectural installation in the world—has also recently been published by Arnoldsche.

Higby at Craft in America