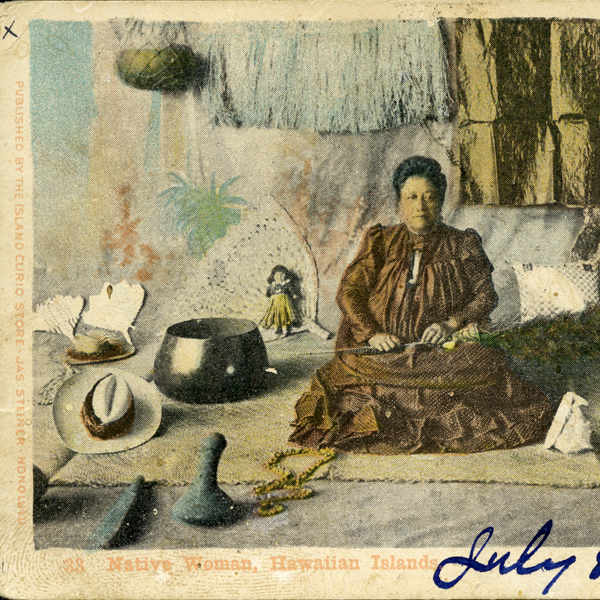 The phrase “extended personhood” refers to the people depicted on postcards, a number of which were derived from photographs made in Honolulu during the 1880s. The Island Curio Company, directed by James Steiner, was a major producer of the cards. Whether or not the subjects depicted on postcards had originally posed for the photographs that were sources for the cards, once imaged on postcards, these subjects became mass commodities in a visual economy of images that linked Hawai‘i with America and Europe. From mass production and sale in Hawai‘i, the postcards became individual or private objects for the purchasers and the ultimate recipients.

The postcards in this collection depict people. Most are Hawaiian with hula halau, hale [houses], and occupational groups, (e.g. lei-sellers, poi-makers, bark cloth-makers) predominating. Hawaiian royalty are a minor subject in comparison to other people who demonstrate crafts that identify the Hawaiian people (in the minds of the postcard producers as well as the purchasers and recipients of the cards). Second in numerical quantity are the white visitors depicted at the sea and on Big Island lava fields.

The exhibition invites the viewer to consider messages from three sources: the images; handwritten messages to intended recipients (or the absence of such messages); and printed captions on the backs of the cards which detail intended colonial messages about the images.