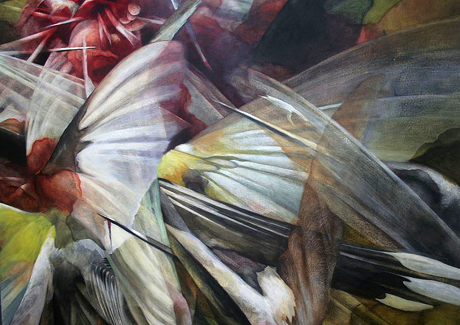 ARTIST STATEMENT
Since the death of my twin brother in May 2007, I have endured suspension between a world I cannot yet enter, and a world to which I no longer feel I belong. Once-fixed horizons became unmoored, passages between points in time collapsed, and concealed specters suddenly emerged. My current research and studio practice centers on exploring these spatial and temporal dimensions of grief. Creating large-scale works on paper, I invoke forces and life forms of the natural world as metaphors for personal and universal experiences of loss, as well as on-going processes of healing. Emerging froma repetitive cycle of rendering and erasure, the creation of my pieces parallels an endless pursuit of reconciling past with present, duration with collapse, disjunction with continuity.

As author and spiritual teacher Joan Halifax observes, “The experience of grief often moves into the wilds, where the forces of the elements, as well as the presence of creatures, plants, land and water forms, the sky, and spirits conspire to break open the husk that has protected us from a deeper truth.” Looking to my own observations of these wilds, preeminently the ocean, I have aimed to pictorialize the physical and psychological features of this strange and unstable territory—that of the bereaved. Untethered to the physics of everyday life, my works seek to suggest entry into a world that is as haunting and sinister as it is suffused with hope for healing— an alien, wayward realm in which all is lost, and anything is possible.