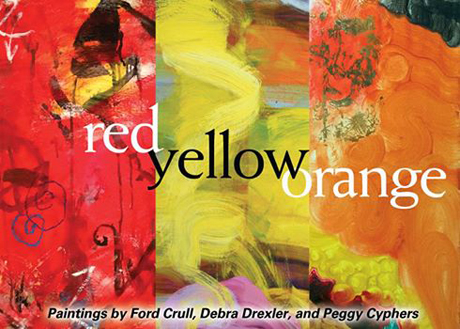 DEBRA DREXLER is one of three artists in Red, Yellow and Orange
at Van Der Plas Gallery in Manhattan.

from the Press Release, “Red, Yellow and Orange is an exhibition of abstract paintings by Ford Crull, Peggy Cyphers and Debra Drexler. Landscapes, figures and forms emerge and dissolve; sending messages from the unconscious, of spirituality and healing. American painting has always had a long-standing preoccupation with the sublime, defining the American character based on its relationship to the country’s wild, beautiful landscape. In New York today, there is a Renaissance of abstract painting, as painters reinterpret and reinvent the paradigms that have shaped the field. The work of Crull, Cyphers and Drexler represents the best of contemporary abstraction: which is skilled and confident while demonstrating courage and invention. The contemporary sublime puts us in touch with what is elementally human, by erasing personal boundaries and supplanting surety with uncertainty and awe. The work of Crull, Cyphers and Drexler assert the primacy of painting by offering an unabashedly transcendent experience through the medium of paint. Archetypes of shadow and light reveal themselves, red, yellow and orange reflected in the water of life.”